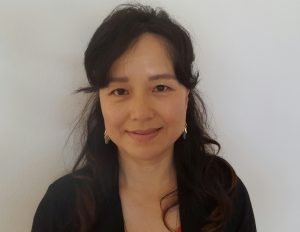 Six years, that’s how long I have known Seolah for. The summer before my eighth-grade year, Seolah and her family moved across the street, and three houses down from me and my family. My mom and I went over to introduce ourselves the next day, my mom inviting her to the early morning workout group, Booty Boot Camp, that her and about five other women in the neighborhood do every Monday through Friday, with the occasional walks to go get coffee after. This caused Seolah to become a close friend to my mom, yet to me I still did not know much about her. I felt that I would be able to use this project as an opportunity to get to know Seolah more, and be able to have her answer questions that go beyond surface level, which would be much of what our conversations consisted of prior to the interview. After being in this class, I was curious to know what her understanding of feminism is, and listen to her experience as an immigrant. I was unsure on how the interview would go, how much knowledge she would have on the topic of feminism, or how in depth she would be willing to go with me. I was pleasantly surprised with how detailed she was in her responses to my questions, and appreciative of how willing she was to answer some questions that could have been very personal to her.

Seolah’s first name is Seolah Park, with Park being her maiden name. She informed me that in her country, the women do not take the last name of the man they marry, unlike the customary American tradition of the woman either changing her last name to that of her husband, or keeping her maiden name, while attaching her husband’s last name to the end. She was born, grew up, and lived in South Korea for a little over half of her life, and moved to the United States a little over ten years ago. Family life in Korea is much more traditional in the order of the hierarchy, with the common epistemology being that the father as the financial provider, breadwinner, most respected figure in the family; the mother being the care taker of the children. In the workplace, if women were in powerful positions, where they had a high paying salary, they were seen as selfish, self-centered, that instead of supporting their family they were only supporting themselves.

“Ya, it was a bad label, ya it was even when I was in the position career, I always worked with the guys. And then I sometimes labeled as selfish, and oh behind me ‘oh she doesn’t care about her family, she is supposed to take care of her son.’ Ya, that kind of, ya discrimination.”

Seolah and her family moved to the United States in part because she wanted to spend more time with her son, Daniel, who is my age. She felt that she was constantly working when she was in Korea, and that she wanted to change that. When she moved to the United States, she was still working, but not as much. From her viewpoint, Seolah feels that women in America have much more freedom, and many more opportunities for equal positioning in the workplace. She has also seen that women have more ability to speak up for themselves, on behalf of their freedom and opportunity, and people don’t judge them. Yet after she said this, she asked me if I feel the same. And if I am being honest, I don’t feel the same. I feel as if women are still oppressed when it comes to speaking up. Women do it, but the reaction that we get when we do is where the problem is. There is still a wage gap, still a glass ceiling, the majority of hands raised in a classroom are by the boys in the class, possibly because girls do not feel confident enough.

I decided to bring up the topic of our president next, asking her opinion about the situation of the discrimination against people based on their race, sexuality, and religion being implemented by Trump. At first, she was hesitant to answer because of her uncertainty regarding my political views, but then continued to answer,

“I very, very struggle with the current president’s view, and to me he is mysoginist, and he devalue the woman, and he view woman as a sexual object, and lower class, ya so I don’t have any respect at all.”

Seolah said that she believes the media wrongly portrays South Korea, and as a result she herself was slightly nervous about going to visit her family there this past summer, because she was exposed to all of the media. Kim Jong Un and Trump constantly “bitching” at each other, containing a lot of threats to each other and their respective countries, providing a lot of wrong messages and causing everyone to be very concerned about the safety of people in Korea. Yet when she and her family went over the summer, there was nothing, people didn’t really care. Seolah explained to me that she feels the American media focuses on the situation with North Korea too much. Yes, they are dangerous, she admits, but the American media puts too much focus on the unsafety of North Korea, which Trump is constantly provoking. She feels that this is the true threat to South Korea, because it is as if they are a hostage between North Korea and Trump.

With regards to the way our current president treats those who are of a different race, religion, and gender, I was curious to know how Seolah felt. I decided to ask if she felt safe as a female, non-white, non-US citizen, and I wasn’t sure what I was expecting in response. She explained that she did not feel unsafe, which could be a cause of her environment (upper-middle class, nice suburban neighborhood), but she does not feel unsafe because of being a woman or because she is a woman of color. She could see how women who are in a lower class, are also non-US citizens, are women, and are not Christian/Catholic would be worried for their safety, though.

I have known Daniel, Seolah’s son, ever since they moved in down the street from me, so for about 5 ½ years. I’ve known him to be a little cocky, and as he got older, a little misogynistic; even owning, and wearing to school (with pride might I add), a shirt with a big, fat, “Meninist” on the front. I have always had a problem with this shirt, so I was curious to know how Seolah felt about it. I chose to ask if she felt the American education system has educated Daniel enough in the sense that he understands the fight for equality among class, race, gender, and sexuality. Almost immediately, Seolah responded with a hard “No. No I don’t think so. No.” She told me that she has commented on his shirt before, and he would respond to her saying “You’re such a feminist mom, it’s just a joke,” yet she doesn’t believe he wears it as a joke. When she brought up that her son calls her a feminist, in what seems like a negative tone, I asked her what she thinks of when she hears the term “feminism,” and how she interprets the word.

“huh, feminism, I think, I don’t know. Feminism to me, especially as a foreigner perspective here, feminism is different. It depends on which cultural context. So, my interpretation of feminism probably different from the definition of feminism here living in the United states. My definition of feminism, um, woman has a equal position, and but we, huh. but this is probably not real feminism. But actually, I can see, although we have equal position as a human being, uh sometimes we have different area we can focus on, or sometimes we can change to work in there, but still there are some area, women where men can show better performance, so I don’t know this sounds like not feminism, but ya”

Following her response, I wondered if she considered herself a feminist. I was somewhat shocked with her response. She said that in Korea she definitely considered herself to be a feminist, and would always fight back to injustice; especially when it came to different salaries and job opportunities. She said it was not easy, but she fought hard. Yet, she is unsure if she is a feminist in the United States. When I asked what changed, she explained that her feminism is a little more conservative. Even though she still considers herself a feminist, she feels as if it is not the right type of feminism that is thought of in America, so she is unsure if she is able to call herself a feminist. With this answer, I was then curious to know if she incorporated feminism into her studies or profession, it at all. What I didn’t know, was that there is a feminist perspective in psychology. Seolah informed me that many of the main “big figure” psychologists were all white men, which caused much of the psychology and counseling theories to be based on a white male perspective. This involved the idea that caregivers, mothers essentially, were to blame for the way they raised their children, which brought up the question by the feminist perspective: where is the father in this? This then created different ways of approaching situations, with a more feminist viewpoint.

There is no question that coming to America is an extremely tough road, but there has to be some sort of good outcome in the end. I decided to ask Seolah what the most gratifying part of moving to America was. “Balance,” she told me, “balance between family and work… I wanted to spend more time with Daniel.” As a follow up question, I asked her what was the most difficult part about moving here, to which she said “Kind of losing, lost sense of myself. Sometimes I feel, oh, I have no idea, who I am. That I really hated.”

I have a very strong newfound respect for Seolah, and feel grateful that she was willing to open up so much to me, especially when some of my questions for her could have been very personal for her. I can see why she is one of my mom’s good friends; she is a remarkable woman. She is much smarter than I believe many give her credit for.

One thought on “Seolah Interview”