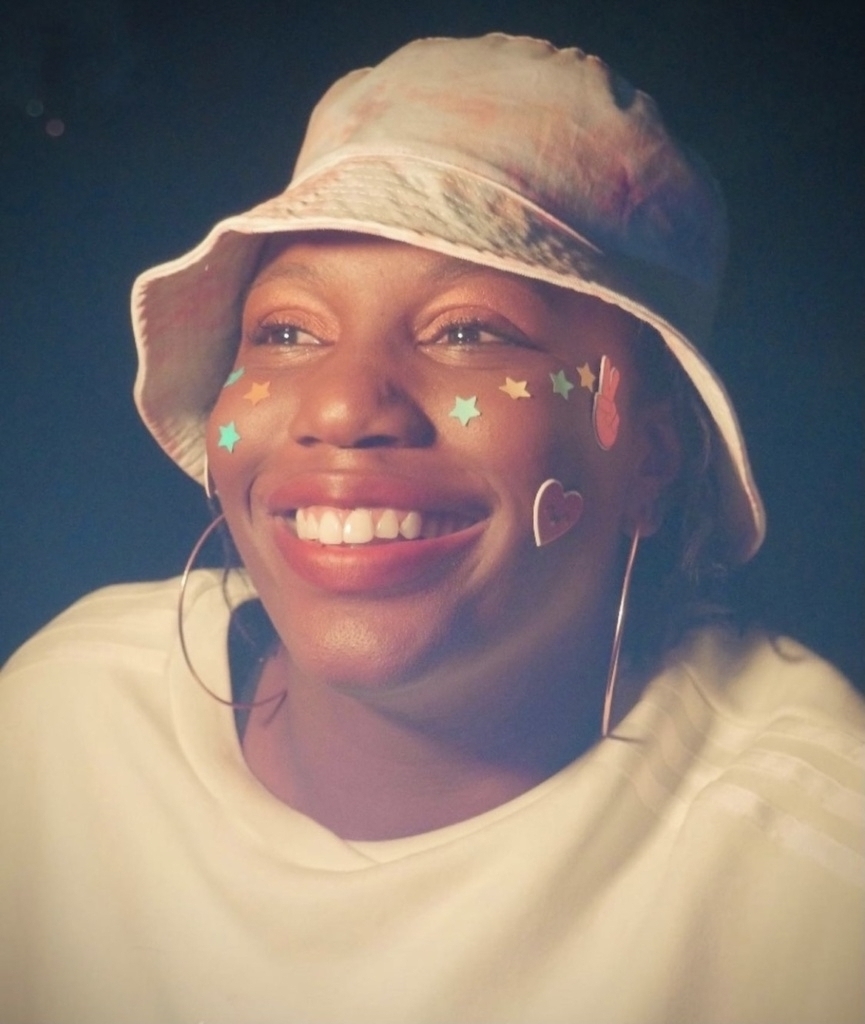 Maya Gwynn is a 29 year old comedian, actress and social justice activist in Southern California. She was born and raised in Rancho Cucamonga, a town about an hour east of LA. Maya’s mother worked for the Rancho parks department, so she always felt that she and her family were very involved in the community. Growing up, both in school and at home, she found herself in predominantly white communities, but she rarely felt unwanted or not accepted in them, if ever. It wasn’t until she went off to college that microaggressions she faced became more and more blatantly obvious. After Maya graduated, she began participating actively in improv troupes at the Second City, and branched out into acting. While she currently resides in Rancho, she runs a small, LA-based company called the 3 Lines Collective, whose main focus is community outreach through improv and creative writing.

Being a Black Woman at a Predominantly White University

After she graduated high school, Maya went on to study journalism at  California Baptist University in Riverside, CA, not too far away from her home in Rancho. From the name alone, it is clear the CBU is a school with a foundation in religion, and one of the most prevalent issues that Maya saw was something known as “spiritual gaslighting,” where people believe that they couldn’t be racist or sexist, or even see why their prejudice is wrong, because of their relationship with God. When asked about her likes and dislikes from her time at school, she couldn’t really recount anything she truly “liked” about her college experience. One of the few positive experiences she did have, were also somewhat negative still: the International Service Projects. “I did them my sophomore year and junior year, and that was the first time I left the country…the trips were problematic, clearly, because like they’re missions trips. But, um, just getting away and getting out of the country and getting out of my space I think, as like a 19 year old was really good and really informative.” CBU is also where Maya found a passion for activism and outreach, though not for the best of reasons. She began attending CBU in 2012, and in her junior year, Trayvon Martin was tragically murdered by ex-cop George Zimmerman. Trayvon’s death rocked the entire country and set off a movement that has yet to be dimmed, despite the vitriol and hatred formed against it, the Black Lives Matter movement. Unfortunately for Maya, CBU was practically silent about it. “I saw like just details of the case and it was just so clear in my head like, clearly George Zimmerman’s going to jail. Like, clearly he was in the wrong. And um, I think just talking about it at my school and just nobody knew what the hell I was talking about. Just like…and I remember just being really upset by that, like nobody- and especially because I was a journalism major.” That silence and lack of respect is what drove her to be more outspoken and join in on the fight, to help people know that they aren’t alone, the way she felt she was at school. When we began discussing hashtags like #BlackatLMU or #BlackatHarvard and dating, Maya talked about her reticence when it came to dating at CBU. “I didn’t date at all. I did not go on one date at all.” This was mostly out of self-preservation, and the fear of traumatic experiences with racist, sexist or otherwise problematic men. Black women face hypersexualization and violence at the hands of white men at an alarming rate, so her fear was unfortunately understandable. And even after she graduated college, she found that when it came to dating, especially dating in LA, “there wasn’t a lack of options, just a lack of good options.” She also discussed her hesitance when it comes to having to “teach” someone how to reprogram themselves and address their own “anti-blackness.” It reminded me of the article we read “A Lesbian Latina’s Adventures With Interracial Relationships” and how the author, Sarahi Yajaira, discussed her preference and comfort in dating someone of the same race, largely because she wouldn’t have to “translate” her native tongue or have to backtrack to explain certain treatment or microaggressions that they face. Racism is extremely pervasive and recounting traumatic experiences, or just correcting learned behavior, is extremely difficult.

After graduation, Maya moved from Rancho up to Los Angeles, where she pursued an acting career, as well as one in comedy. At 22, she began taking improv classes at the Second City in Hollywood and eventually graduated from their main improv program, as well as the long form improv program and has been doing improv now for 8 years. When we discussed her time working in improv and acting, it was hard not to talk about the culture of “dark” and “edgy” humor, which are typically gentler ways to say “racist” and “offensive” humor. Maya admittedly was never afraid to combat any overt racism she encountered, but it didn’t change the fact that she always felt anxious about being the only one to speak up, or even just having to be the one that everyone looks at to speak up. Additionally, she felt it wasn’t until she began working as an actress and comedian that she truly experienced fetishization and sexualization for her skin color. “I think I’ve been lucky in some circumstances, because with acting too, I’ve never had an audition experience where someone’s been like “Oh I need you to act blacker” -no one’s ever said that to me thankfully. But, I think it’s because they know that on Twitter and stuff, people will drag the hell out of them… And I’ve never had anyone, any guys say “I’m not into black women” like no one’s ever said that to me, but sometimes it was definitely implied.” It’s no secret that black women, namely dark-skinned black women, are mistreated at a much higher rate than fair-skinned women, and in the entertainment industry it is no different; if anything, it’s worse. In the documentary The Illusionists, director Elena Rossini not only discusses the misrepresentation and hypersexualization of women’s bodies, but also their entire identities. Colorism is one of the most common issues. In the documentary, they discussed products like “skin lightening cream” that are marketed to brown women all across Asia and India, but in the U.S. media, it’s not always that immediately obvious. Gorgeous black and brown celebrities like Beyonce, Zendaya, etc. have been photoshopped to appear whiter than they actually are, while white women are praised for adopting the same beauty standards that black women have historically been demonized for. And unfortunately, colorism is an issue within the black community, as institutionalized oppression often leads to internalized hatred of oneself. Maya recounted that the only times she experienced colorism first-hand was at the hand of another black woman, “The only time ironically I’ve ever had someone say like “Oh, dark skinned girls aren’t pretty”, it was another black woman.” Throughout this semester we have discussed bell hooks and Feminism is for Everybody at length, and one of the first steps that women have to take in order for feminism to truly flourish is to confront internalized biases towards sex, and further, towards race. In a later chapter, “Race and Gender,” hooks says “Racism and sexism combined create harmful barriers between women” (hooks 59). And since a lot of the beauty standards that perpetuate the belief that “dark skinned girls aren’t pretty” are rooted in the heteropatriarchal standards, it just shows how deeply entwined racism and sexism truly are.

Maya’s experiences at CBU, as well as in the entertainment industry, eventually fueled her to brainstorm ways that she could use comedy and acting to give back. She began working for programs that focused on teaching improv to children coming from youth recovery centers. While very rewarding, it was also obvious that these programs weren’t as widely available for everyone and that the children she was teaching still came from more privileged backgrounds. Coupled with the uprisings in the wake of George Floyd’s death at the hands of the police, Maya knew that she wanted to create a program that would allow her to use her expertise in improv and writing to give back directly to the black communities across Los Angeles. At the end of 2020, Maya did just that by creating the 3 Lines Collective. The 3 Lines Collective is, in Maya’s own words, “a community based organization, that’s purpose is the black community and trying to uplift the black community through creative arts.” Through online improv and creative writing classes, Maya intends to engage black children and teens to spark their creativity. Maya finds that there is an inherent link between comedy and activism as both rely on honesty and vulnerability. 3 Lines also is committed to highlighting black-owned businesses in any way possible in an effort to combat the way that capitalism and systemic racism attempt to stifle them. Every Friday is #BlackBusinessFriday on the 3 Lines Instagram, where they will post about a different black business every week. In addition to their social media outreach, 3 Lines has authored two zines chock full of black-owned restaurants and self-care brands across Los Angeles, the Inland Empire and the San Fernando Valley. Her commitment and passion towards teaching and outreach are incredibly apparent, especially when asked about her hopes for 3 Lines in the future: “I’d want us to always be intentional and always be honest with like what our intentions are. And being effective in those, even if we are just serving in like 2 schools or can only do certain classes on certain days because we want it to be intentional. That’s what I want.”

Speaking with Maya and reflecting on the texts that we’ve engaged with over the course of this semester have really forced me to open myself up and take a look at my own biases towards myself, as well as the world around me. As a cis white woman in the US, I have been set up with an advantage that my black and brown peers aren’t allowed and no matter how much research I do or conversations I have, I will never truly understand the intricacies of being black in the US. I’m sure many of my classmates and other white students who have done this assignment would probably say something similar, and rather than embolden people to fight back, some sink down in fear or reticence or uncertainty of what they should be doing. Maya’s work has shown that not every activist has to look a certain way or do a certain thing for their work to be impactful, and how imperative the creative arts are in empowering and engaging others. Protesting is often seen as the “only way to fight back” because it is the epitome of the idea that there is strength in numbers, not because it’s truly the end-all, be-all. Engaging with your community, creating art, film, music, literature, these are all ways that you can form a largely populated resistance and impact the world through positivity. To quote Che Guevara, as quoted by Sonya Renee Taylor, “At the risk of seeming ridiculous, let me say that the true revolutionary is guided by a great feeling of love” (Taylor 91).

Hooks, Bell. Feminism Is for Everybody: Passionate Politics. Routledge, 2015.

Yajaira, Sarahi. “A Lesbian Latina’s Adventures with Interracial Relationships: To Speak or Not to Speak Spanish?” QWOC Media Wire, www.qwoc.org/2012/06/a-lesbian-latinas-adventures-with-interracial-relationships-to-speak-or-not-to-speak-spanish/.